The Grass is Greener on the Other Side of the Fence?

I observed a juvenile snapping turtle at a land development site in Wheaton/Layhill, Montgomery County, Maryland.  The turtle was climbing a fence to get into a stormwater management pond, and was coming from a created wetland and perennial stream.  I think that the grass is greener on this side of the fence than where he probably came from, but snapper’s gotta have the permanent pool of pond waters. 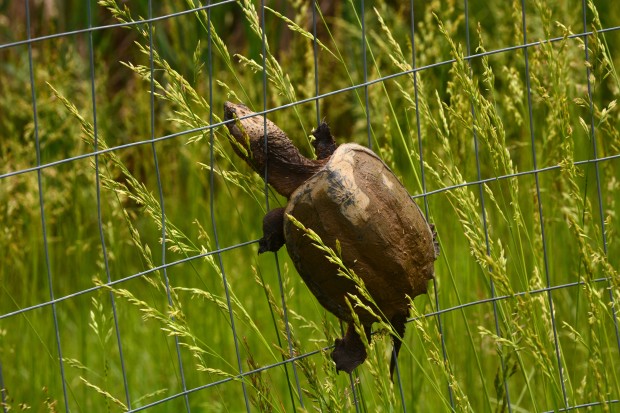 The eastern Snapping Turtle (Chelydra serpentina serpentina) is the largest freshwater turtle in Maryland.  This adaptable species may be found in virtually any pond, lake, marsh or other permanent body of water.

Snapping turtles are omnivorous, and well-equipped to eat nearly any appropriately-sized animal in its habitat.  They have also been found to feed on skunk cabbage and other vegetation, and will even scavenge carrion.

Unlike many other species of aquatic turtles, snapping turtles typically don’t crawl out of the water to bask, generally preferring to stay in the relative security and concealment of the water or mud. 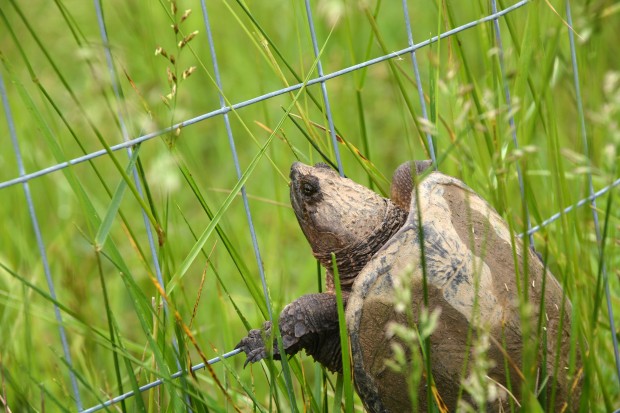 When this turtle is found crossing land during dispersal or to oviposit, it can often be famously cantankerous and ill-tempered.  The incredible speed and large strike range of its jaws should not be underestimated, and caution and common sense is advised around the biting end of the snapper.