I have a goodly amount of use or loose annual leave, so if the work is done, and the day is beautiful, I’d like to get in some autumn fishing.  Today it was the fresh tidal Patuxent River at Jug Bay, in Croom and Upper Marlboro, Maryland, along with Steve Kolbe.

We launched out of Jackson’s Landing at the M-NCPPC Patuxent River Park at Jug Bay.

The Park’s Department is in the process of building a new wooden observation tower along a cliff edge that will provide outstanding views of the rice and spatterdock marshlands.

Steve and I motored north to Western Branch during the morning high tide, and fished a falling tide through the morning and midday.  First cast of the morning produced this really nice yellow perch, and the fishing stayed great through the day.

With the few hard frosts that we have had recently, and the fact that this is Halloween weekend and the last weekend of daylight saving’s time, I was surprised to still find any flowering forbs.  At two locations I observed green-headed cone-flower (Rudbeckia laciniata) growing along the banks of the river.

Steve holds a nice black crappie that he pulled out of a sunken brush pile.  Crappie like cover, and where you usually find one, you will find several, as was the case.

We caught several channel catfish on the day, a species that takes advantage of deep holes in outside meanders.

I’ve included with this blog entry, a 17-page PDF file entitled  “The Fish of Jug Bay, Patuxent River, Maryland:  A Pictorial Key,”  September 2007.  A good guide, click the link to see or download: 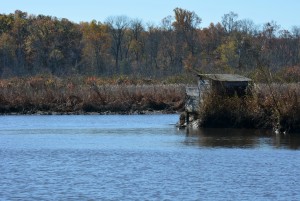 It was a beautiful sunny day on the water.  We watched as a few basking turtles were still taking advantage of thermal heating available from logs above the water.  We also observed a garter snake swim across the stream.  It won’t be long until the few duck blinds that dot the shorelines, come into play.

We motored to Wayson’s Corner to fish along the banks of residential homes, and on the way observed several flocks of either lesser yellowlegs or solitary sandpipers feeding in the exposed tidal flats of low tide. 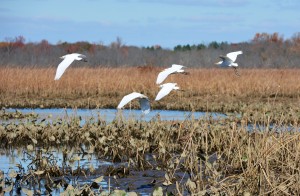 A flock of egrets was loafing in the marsh, digesting their morning meal. 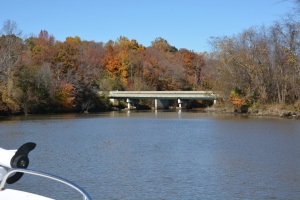 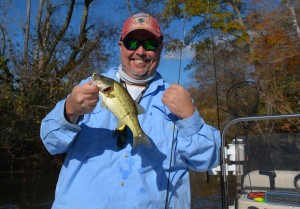 Steve and I both caught largemouth bass, and it was a great day of fishing overall, as we caught high numbers and species.

The only other fisherman on the water, was a gentleman named Paul, who is a local from Croom, and knows these waters like the back of his hand.  He was kind enough to share fishing tips, and spoke highly of the Patuxent and several tributaries.  Paul wanted to send some photos to his brother and asked if we could take a few on his iPhone, which we were happy to oblige.  He took out three lunkers from his live well, got the photo documentation and then released them back into the water.  Thank you Paul for your local fishing advice! 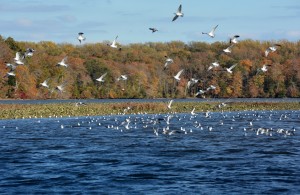 Satisfied with a great day trip on the water, Steve and I motored back to Jackson Landing in the afternoon.