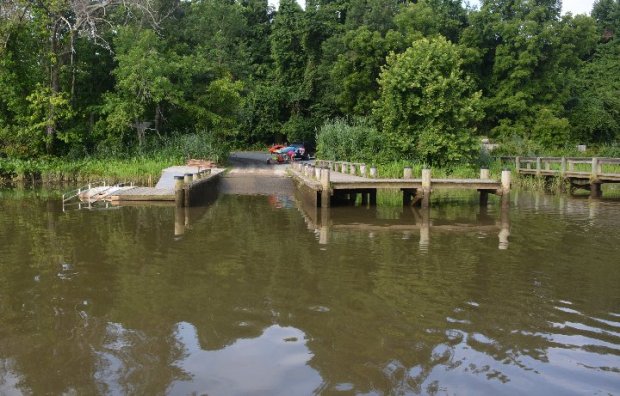 Jim and I went fishing this morning, launching from the MNCPPC boat launch at Jug Bay (Jackson’s Landing). 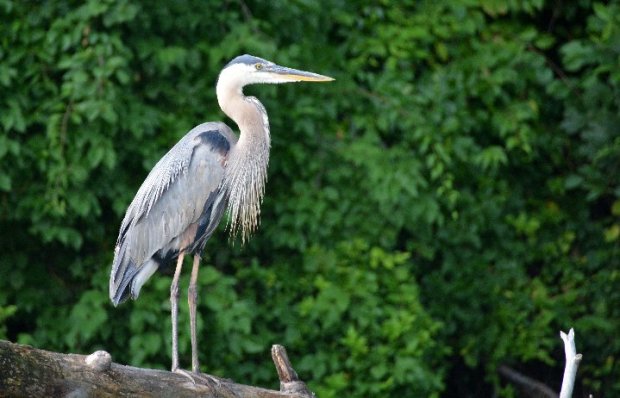 A blue heron greeted us as we motored upstream toward Western Run. 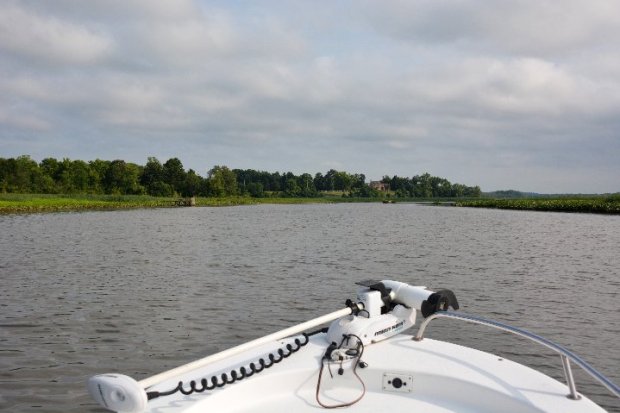 A scene on the Patuxent River near the historic Mount Calvert tobacco plantation (background). 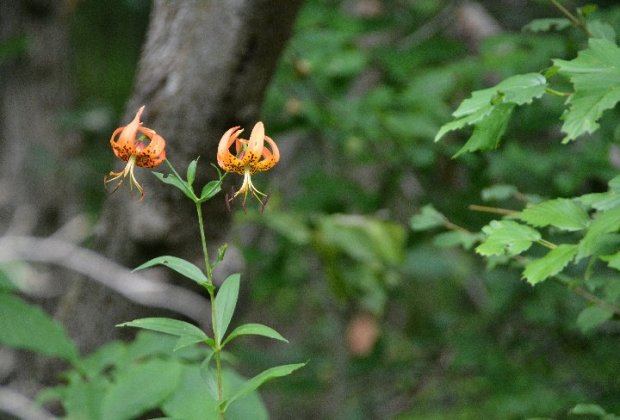 While fishing on Western Run, I noticed Turk’s Cap Lily (Lilium superbum) in bloom on the bank. 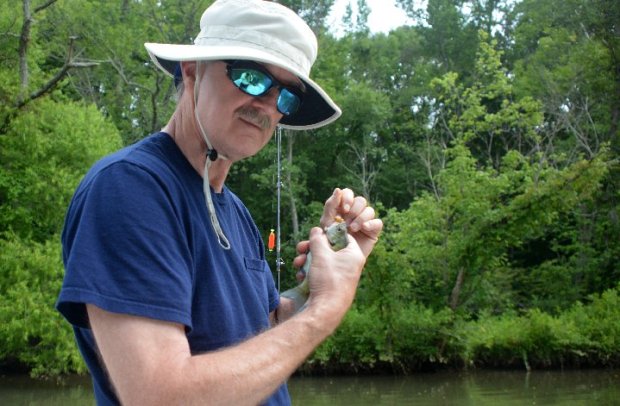 Jim and I caught dozens of bluegill and a few catfish. 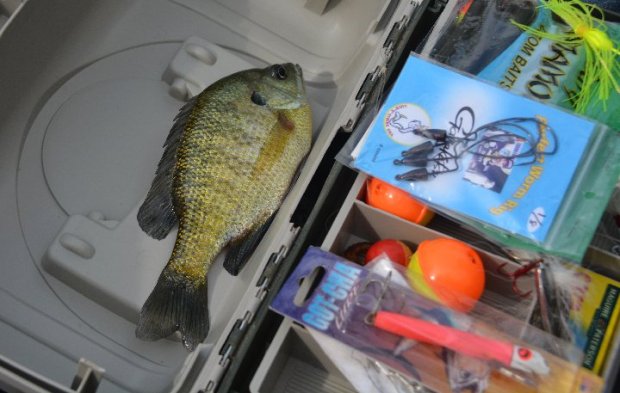 A view into Jim’s tackle box.  What lure should he try next? 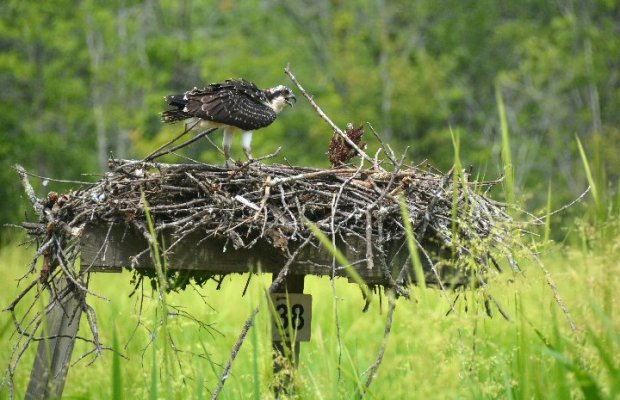 The following is the link for the MNCPPC Live Osprey Cam: 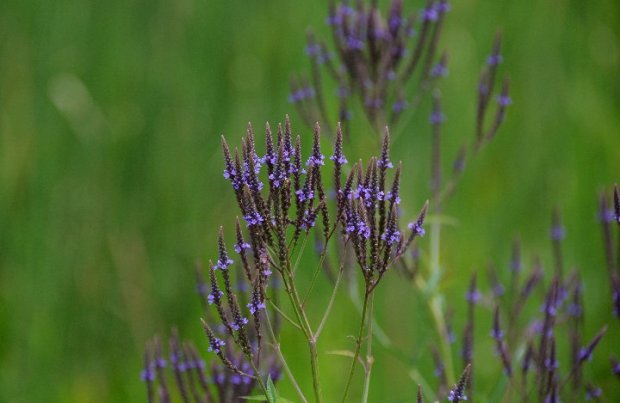 I saw Blue Vervain (Verbena hastata) growing on top of a beaver lodge, and went in for the photo.  We also saw tall meadow rue and pickerelweed in flower, and then a few hibiscus starting to bloom. 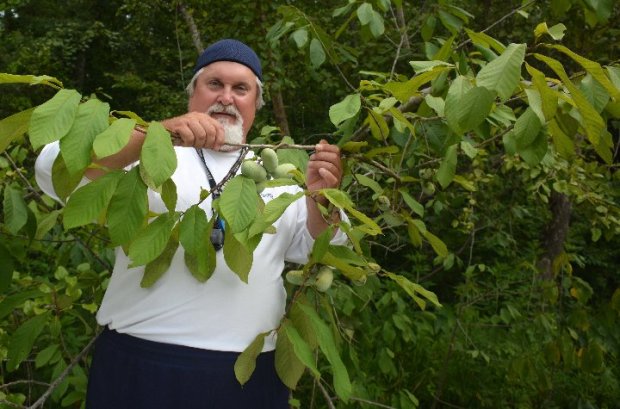 A Paw Paw (Asimina triloba) was hanging over the water from the weight of its fruits, which will ripen in early autumn.  The fruit, which tastes like a cross between banana and mango is highly sought-after by raccoon when ripe.  This single branch had 11 fruits on it. 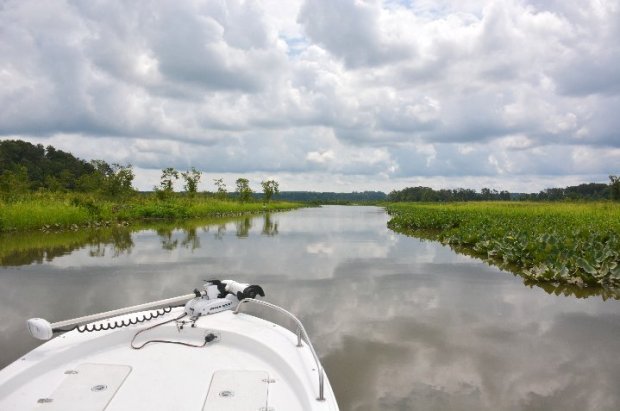 We headed back to the launch at peak of high tide, around noon, as I had an important evening engagement, that being my grand daughter, Harper Francis, first birthday party.

The Patuxent River has extensive marshlands with many small dendrite draws through the vegetation, and which is a good location to set traps for snapping turtles. 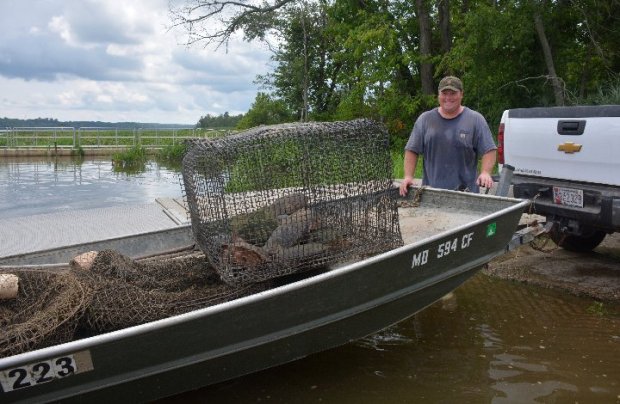 This gentleman is a snapper trapper!  I met him last year on the Chicamuxen, and again today, as we were both pulling our boats from the water. 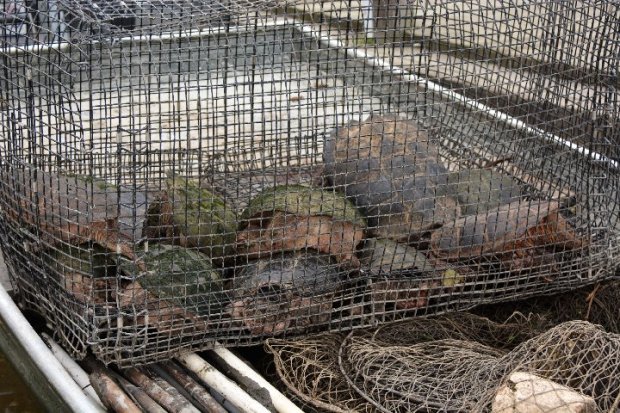 Being a MD DNR licensed commercial waterman, he must adhere to strict management protocols when trapping, including filling out detailed harvest records. 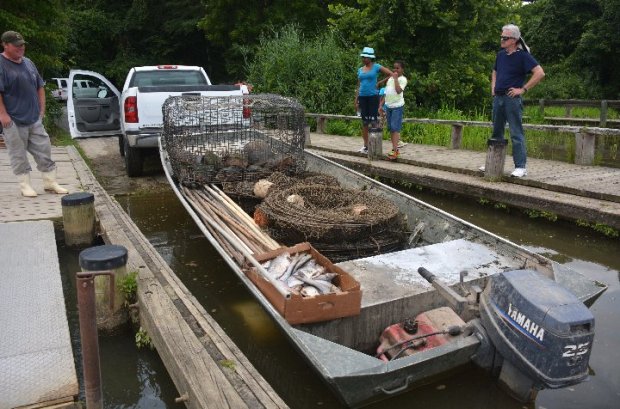 The hoop net he uses is about 10-feet long and reduces to a narrow opening, being baited at the end with fresh shad.  The bamboo poles hold the net open and set in place.  The turtle smells the fish, enters and walks/swims to the back of the trap and is captured.

The turtles must be a minimum of 11-inches in length from shell tip to shell tip (carapace).  Each pound of turtle yields $1.00 at market, and today’s catch of 13 turtles, weighed 400-pounds, thus $400.  His yield from yesterday on the same waters was 800-pounds. 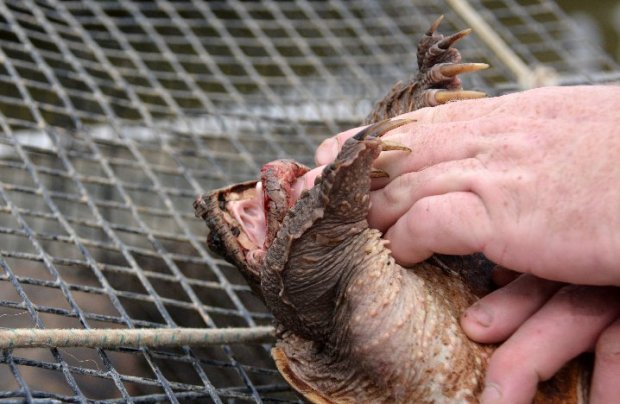 He pulled a snapper from the pen to show me that in July the turtles loose a hard rigid plate located under the jaw.  Note how he was able to press his finger up and under the jaw.  Through the course of about three-weeks, the turtle will develop a new hard plate and his snapping jaws will become much more powerful.  During this shed period, snappers shift to a temporary, more vegetarian diet.

At this same time, the underside of the shell (plastron) will slough-away in thin sheets and reset into a newly expanded hardened shell.  He was able to use his fingers and rub away the belly of the shell to show me how it works.

He equated it as being similar to when a snake sheds, or when a Canada goose will molt flight feathers in early July.  Quite interesting.

Thank you Jim for a fine morning of summer fishing.  Fun was had by all.