Back on May 12, 2014, I found a population of American Ginsing (Panax quinquefolius), which is a MD DNR Natural Heritage Program watchlist species (S3), meaning that the plant is rare to uncommon with the number of occurrences typically ranging from 21 to 100 populations in Maryland.

I made a point to note in my calendar that the plant comes into bloom during mid to late June.  Today I revisited the site and none of the 90-plus plants were yet in bloom.  The site is a second order, Piedmont stream located on private property in Howard County, MD.  The stream valley includes numerous rock outcrops and many of the hardwood trees exceed 30-inches diameter.  The valley includes spring seeps covered in skunk cabbage and steep slopes.

The rock outrcrops were dominated with Rock Polypody (Polypodium virginianum) and the stream valley was dappled with Christmas fern and large aggregates of New York fern.  Solomon seal and enchanters nightshade were common along with Indian cucumber and partridgeberry, both in bloom. 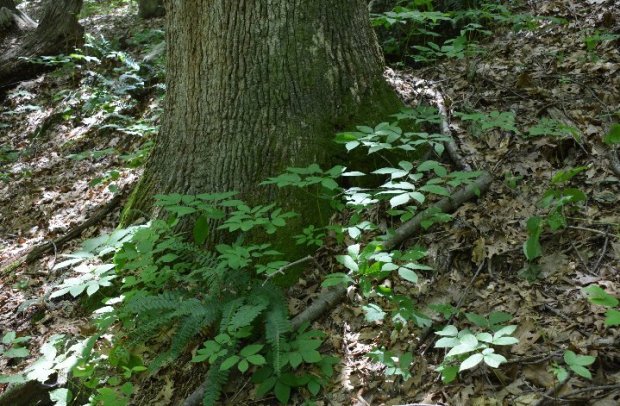 In May the ginsing was fresh, young and quite healthy looking.  Dozens of the plants now look as though they have been grazed, including some minor insect feeding.

I saw no evidence of the flower stalks rising from the whorl on the main stem.  I understand that only a few of the more mature plants will flower in any given growing season.  It looks like we will just have to wait until late June, and hope that some will flower and seed.  This stream valley is the “beauty,” and now for the “beast.” 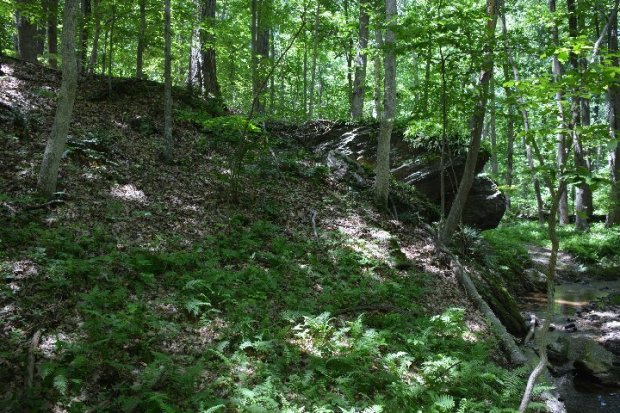 You would assume that a mature, undisturbed hardwood forest with a wonderful guild of herbaceous species would be able to fend for itself, but, nooo.

Growing right along with the rock polypody, I found the newest, latest, insidious non-native, highly invasive, beast of a plant to invade Maryland, the wavyleaf basketgrass (Oplismenus hirtellas).  The plant has wavy leaves and looks a little bit like Arthraxon and deertongue.  As we left the site, I went on to notice several more individual plants along deer trails.  The following are two flyers on the plant.
dcnr_010307 WavyleafBasketGrass
WavyleafBasketGrass