I was in my back field cleaning-up fallen limbs from recent heavy rain and I watched an adult groundhog and hawk in my neighbors field.  The hawk was perched and intensely watching the groundhog, knowing full well he could not take him.  The bird watched out of curiosity.

I walked back to the house and got my camera.  I sat behind an apple tree in my neighbors yard and just watched for a few minutes.  I’m sure the bird knew I was there, but I must have been enough distance away, as to not spook the bird into flying away.

The bird was a juvenile (immature) red-tailed hawk, and is in the process of skills development.  The edge of my neighbors yard has the remains of several tee-posts along the property line and the bird flew from post to post watching a two-acre area of meadow, in what was otherwise a mowed four-acre lawn area. 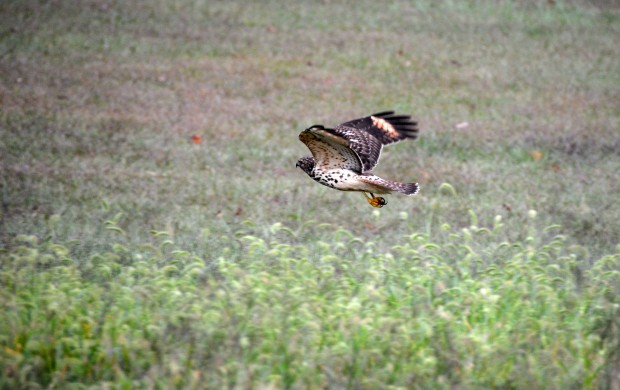 The bird made a few touch-and-go attacks in the field.  He also hopped around a bit, I guess trying to jump-up a critter.  The grass and forbs were tall and difficult to negotiate when bouncing and hopping.  He needed his perch to gain a visual advantage. 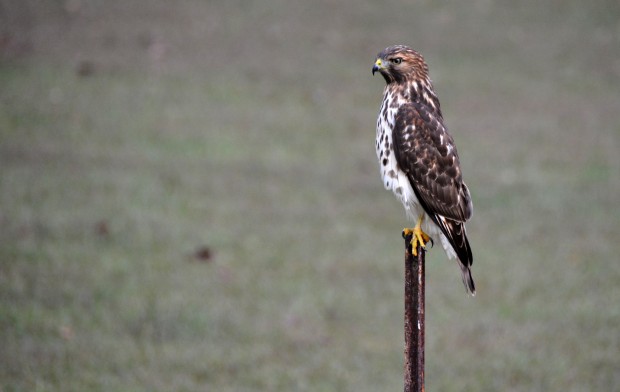 Now and again he had to perch and re-obtain a dignified pose.  After a few minutes he flew off, I’m sure to another nearby field to continue with his training and to fetch some dinner, whether it be a small mammal, mouse, mole, vole, shrew, chipmunk, squirrel, or possibly a snake, frog, young rabbit, and on rare circumstances, a song bird.

After he flew away, I went over to the ground where the raptor spent most of his time on the ground, and only saw some scratchings, and no evidence of the remains of prey.  I took this photo of the fallow field that the bird was hunting, and my property is in the background.  I wish that my neighbor would cut their lawn more often, but the habitat diversity is interesting and valuable.

Red-tails are year-round local residents and are one of the most common of hawk species.  They love open country and you will often see them perched on fence posts, overhead wires and on road signs along highways. They can have quite variable plumage and can also have regional differences.  It can be a difficult hawk to key-out, especially at a distance, as it looks similar to two or three other species.

They have the absolute most classic, common song:  http://www.birdjam.com/birdsong.php?id=40