A Mental Health Day on the Mattawoman

Dave, Steve and I took the day-off and went fishing for the day.  We got on the river at 11:00 AM and fished until 3:00 PM.  The fresh-tidal river was at low tide, and we saw no evidence of SAV, just open channel to the shoreline.

Temperatures were in the mid 70’s, but it was quite windy, with the big open parts of the Potomac River having rolling waves.  We had to use the trolling motor and anchor to keep us on good holes.  We even got stuck a time or two, and had to use the anchor to walk ourselves off of a mud flat by throwing the anchor forward and pulling ourselves into deeper water.  Note to self – buy a push pole.

We caught three largemouth bass, a 1-pounder, a 2-pounder and a 3-pounder, several white perch, and the following photos show the big haul of the day. 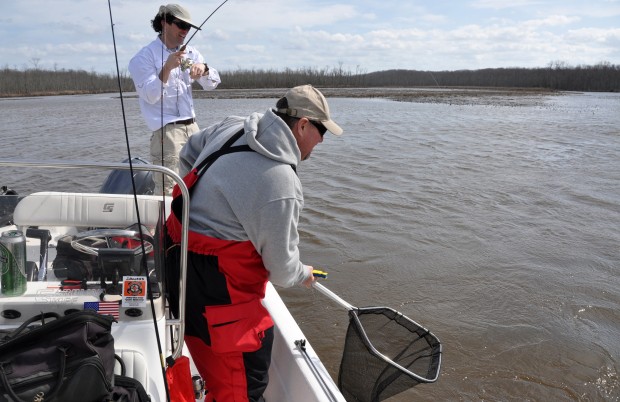 Dave hooked into a monster carp, which weighed 18-pounds but felt and fought like she was even bigger.  Dave was using a light-action rod, with 6-pound test, and caught the carp using a chartreuse-colored Blakemore Road-Runner. 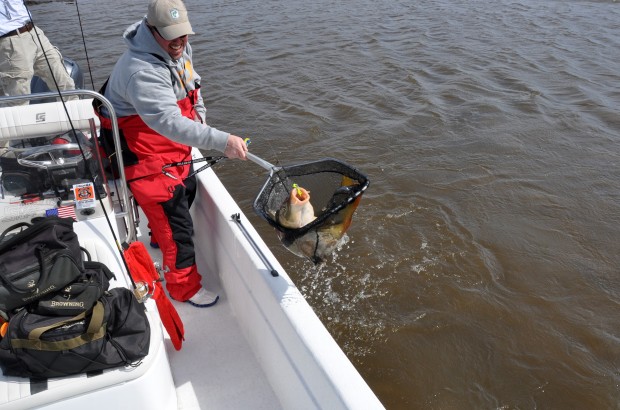 It took Dave about 20-minutes to land the fish, with Dave and Steve taking four laps around the boat and having the fish try to break free by hanging up in a downed snag.  I was able to maneuver the boat and unwind the line.

Over three-feet long, and weighing in at 18-pounds.

The Blakemore was being used to cast into woody structure along the banks for crappie, and into deep holes for yellow perch.  We had no idea that we bagged a carp.  Until we saw her break water for the first time, we assumed that we had a mega-catfish. 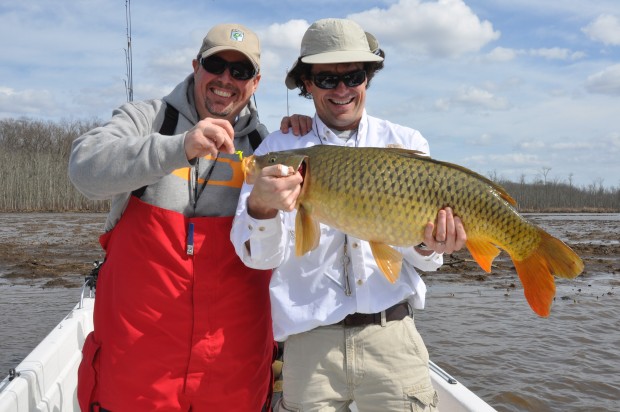 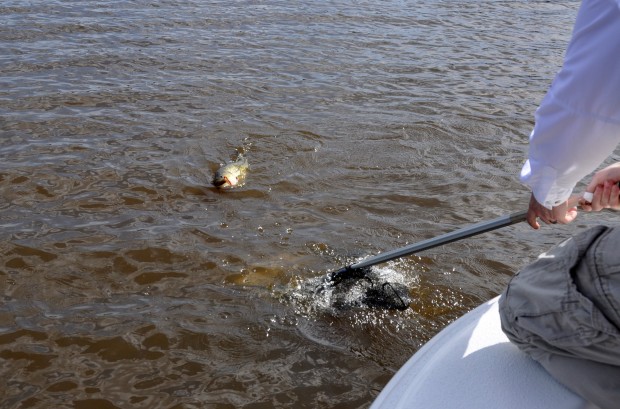 The water was stained where the winds were sheltered, but then cloudy in open water due to the high winds.  Although windy, the warmth of the mid 70’s felt good.  Water temperature averaged about 52-degrees.  We even saw our first osprey of the year, and bald eagle sightings were common.  Kingfisher, redwing blackbirds, mallards, gulls, geese and heron too.

We were surprised that we saw several bass boats on the water.  I think many a fishermen made note that Thursday was going to be in the 70’s and the reports of yellow perch on the run, made for a bunch of people taking the day off. 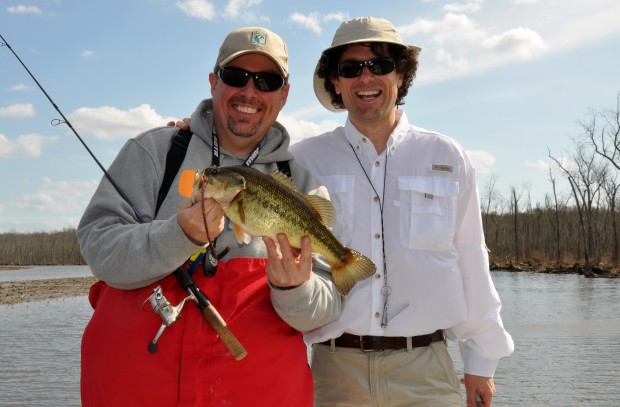 Driving through southern Prince George’s and into Charles County, we saw many Malus (the crabapples), Pyrus (Bradford pears), Prunus (ornamental cherry) coming into flower, red maple in full flower, and significant bud swell on other species.

We fished over a few deep holes, hoping that we would catch enough yellow perch, that we could actually make dinners for our families.  Nothing doing, no yellow perch at all, but we did catch seven nice white perch, all of which we threw back.

Beautiful day on the water.